Well, kids, I promised to deliver Volume 8 within 2 weeks of the book's release, but then hurricane Sandy hit and compromised my access to both the internet and the necessary scans.  I actually got the book early, too, so that's irony for ya.  I work 12-hour days during the week, so I won't be able to have the entry up until this weekend.

Hopefully, I can quell any feelings of rage and betrayal by pointing you towards some ridiiiiiculous cells and transcripts that have suddenly surfaced for that ill-fated Toonmakers Sailor Moon animated series.

You know you want to see quality animation cells like this one of Mercury in her wheelchair-hang glider-spaceship-hair salon: 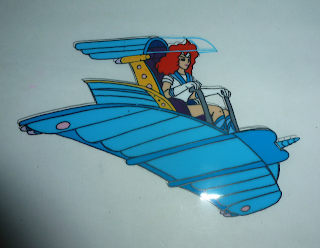 And you know you want to read excerpts from the ALL-CAPS, typo-ridden script.  So do yourself a favor and check out Sailor Moon News (there are several posts about these things) and this topic in the Genvid forum.
On second thought, this might just increase your feelings of rage and betrayal...
Posted by SailorHell at 10:39 PM 15 comments:

Email ThisBlogThis!Share to TwitterShare to FacebookShare to Pinterest
Labels: acts of God, it's a pretty decent excuse I think, she can play dress up and look so sweet then morph into a force that can't be beat, work sucks

Volume 7 stars Sailor Uranus, who is "both male and female" and who possesses a sword that lengthens during periods of excitement.

There was nothing about this volume that made me scream into the cold, pitiless night, and nothing that made me dance a merry jig on my balcony.  There were a lot of grammatical errors and typos, which freaks me out, but if I chew enough Prozac, I get by.

Remember how Tokyopop translated Ptilol's name as Petite Roll?  Shh, I know, it's painful to remember.  Well, Flanagan didn't repeat that error.  I remember before this reprint even started, people were worried about what would happen to some of these wacky names in the Infinity story arc.  We can now breathe a sigh of relief, because all the names have been properly translated.

On a totally unrelated note, and just because I have to follow every bit of praise with a complaint:

What is with Flanagan and the phrasal verb "put out"?  His obsession is not unique to this volume; he's used it before to say things like "why doesn't the Legendary Silver Crystal put out light?" (Wiseman in volume 4).  One feature of English is that it has a bajillion words.  I think it's the duty of a translator, writer, or anybody manipulating language to use them.  Why not use "bloom" instead of "put out a bud"?  Why not "giving off" or "producing" for what Luna's saying?  Why not "grown", "sold", "distributed", or whatever for the last panel?  It's just lame, clunky, and boring to fall back on the same words so much.
Now that I've put that out there, let's go into the details of this volume.
Read more »
Posted by SailorHell at 4:09 PM 6 comments:

I attended New York Comic Con Friday and Saturday cosplaying as a green Converse-wearing Sailor Jupiter.  This was my first time at NYCC, and I was surprised by how well-represented anime and manga were by both the cosplaying attendees and the booths on the showroom floor.  There weren't many Sailor Moon cosplayers, but it's safe to say that most of them were present for Kodansha's panel.

If you'd like to watch the Sailor Moon segment of the panel, you can check out this Youtube video recorded by another, more dedicated Sailor Jupiter who was in attendance.  FUN FACT: At 10:28, after they finish reading Takeuchi's special letter to us American fans, you can hear me shout, "I love you, Naoko!"

Since I know you're all such uber fans, you likely have already heard that Kodansha will be releasing a new art book featuring selections from the 5 original Japanese books AND some "unpublished original drawings."  This book will be released simultaneously in 7 countries, and the bonus material will differ for each country, which means we'll just have to buy them all.  Read Kodansha's official announcement here.

I won't sit here and summarize everything else, because you can just watch the panel yourself.  I will say that the panel was a lot of fun, and the folks from Kodansha were all very jovial and good-natured. Someone did ask about correcting errors (at 8:12 in the Youtube video) but besides that, there wasn't any talk about the quality of the manga re-release.  I think it was better that way, because if people started throwing down about Princess Beryl, William Flanagan, and sloppy editing, the whole positive atmosphere would have been ruined.  As far as I'm concerned, Kodansha is on notice about the various problems present in the manga and have actually moved their arses to fix some of them (such as many of the facepalm-worthy issues in volume 1) thanks to fans' repeated complaints, so I didn't feel the need to pick a fight at this panel.

Afterwards, a bunch of Sailor Moon cosplayers met up to take some group pictures.  This was a lot of fun, and we attracted quite a crowd of onlookers snapping photos.  God knows where I'm going to show up on the Internet after that.  I saw a few more Sailor Moon cosplayers at other times during the convention, including two different Professor Tomoes, a musical version of Super Sailor Moon who was sporting a big Sailor Moon tattoo on her arm, and a seriously creepy Tuxedo Kamen.  No Sailor Uranus, though!

﻿
Other remarks about the convention:
-The convention organizers said that bootlegs were not allowed, period.  Yet, I saw many bootlegs being sold.  See that stuffed Luna on the floor in the picture above?  Bootleg.  There was even one guy running a booth stocked with nothing but bootleg DVDs.
-Popular costumes included Finn from Adventure Time, Poison Ivy and Bane from Batman, Deadpool, and lots of people with candy corn-colored horns on their heads.
-Want to buy lots of cute stuffed things?  Go to NYCC.
-While riding up an escalator in a train station, a guy behind me asked me if I was Wonder Woman.  I said no, Sailor Jupiter from the series Sailor Moon.  He didn't know who I was talking, and then said, "so, I guess if I get into trouble, you can't save me."  To which I replied, "Of course I can!  Sailor Jupiter is a superhero, too!"

Now, how about my review of volume 7?  Well, we are about two weeks away from the release of volume 8, so you guys are going to get a double dose of analytical goodness real soon.  I guarantee volume 7 will be posted by Monday, October 22nd.  If it isn't, I will post my home address so that you can mail me angry letters, garbage, poop, or any other unpleasant thing.  I will then have volume 8 up within 2 weeks of the official release date.  If that doesn't happen, please refer to the previous note about mailing me crap.

Let’s skip me apologizing for the obnoxious delay on this review and just jump right into the delightful newest volume of Seeeraaaa Muuuun.

I absolutely love this cover.  It exemplifies the sweet, sparkly charm and cheer that makes Sailor Moon so appealing to millions of fans of all ages.  You wouldn’t dare call this Chibi Moon “the Scrappy Doo of Sailor Moon,” would you?  Scrappy Doo never looked this cute.  By the way, get your fill of those sexy boots, because the only other full-body cover picture we’ll get is on volume 11.

As far as what comes after the cover, I’m pretty happy.  I didn’t find any typos, misspellings, or grammatical errors.  The translation is accurate and, by and large, more natural-sounding.  Reading Tokyopop and Kodansha side by side, I saw many sloppy Tokyopop errors that were, by the grace of the Ginzuishou, not repeated in Kodansha, including 5(!!) instances where dialog is attributed to the wrong person.

Other general comments before we dive into the nitty-gritty:

Mugen – So, I really don’t care if “mugen” is left as-is or if it’s translated as “infinity”, but I like consistency, and saying Mugen Academy is located in the Infinity District isn’t consistent.  I don’t
understand why the academy is the only place in a whole island of places named Infinity Whatever that uses Mugen instead.

Ten'ô, Kaiô, Meiô – These romanizations are perfectly acceptable, but seem overly complicated to me, especially in the case of Haruka’s name, which has been invaded by an apostrophe.  What’s wrong with Tenou?  It’s nice and easy and doesn’t require me to find that stupid O with a hat. 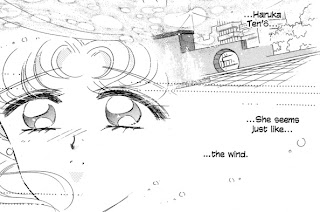 Haruka being referred to as “she” before she is officially revealed to be female - Usagi and everyone else refer to Haruka as a "he" because they believe she's a man.  In Tokyopop, no one starts referring to her as a "she" until she reveals herself as Sailor Uranus and starts dressing as a woman.  In Kodansha, however, Usagi uses the feminine pronoun before she's certain of Haruka's gender.  Haruka doesn't make an appearance in womanly garb until later in the act, and her identity as Sailor Uranus doesn't come to light until the next act, so why would Usagi suddenly use "she" here?

Unlike English, Japanese doesn't require a subject in every sentence, and it uses the 3rd person pronouns for he 彼 (kare) and she 彼女 (kanojo) sparingly.  It's easy to talk about someone in Japanese without revealing their gender, whereas in English, you have no choice unless you want to sound a bit weird and use they and their for a singular subject.  Thus, the translators must decide which pronouns to insert.  "He" is the most logical option based on what the characters know at this point in the story.

One the other hand, Usagi is experiencing some serious confusion about Haruka's identity right around now, and just had a pretty kinky dream about him / her, so I could accept that as an argument for why she might say "she" at this very moment.  Furthermore, to quote Haruka herself: "Man?  Woman?  Does it really matter that much?"

I've decided to start commenting more on the story itself, rather than just the differences in translation and adaptation.  Those comments will appear at the end of this post.  I wish I could make a separate jump cut for them, but that doesn't seem to be possible.  I considered making a separate post for story comments, but decided against it.  If anyone has any feedback on how I should format everything, I'd love to hear it.

Email ThisBlogThis!Share to TwitterShare to FacebookShare to Pinterest
Labels: 17 year olds, driving a real race car and playing a racing game are totally the same thing, just keep the words in the same bubbles, shut up Usagi, so many doujinshi and lemons were born from this volume
Older Posts Home
Subscribe to: Posts (Atom)

SailorHell
Sailor Moon: I like it. I earned a bachelor's degree in Japanese language and literature in 2007. I lived for about a year-and-a-half in Japan. I then earned a master's degree in Teaching English as a Second Language in 2011. I now teach ESL to adult immigrants in the United States.